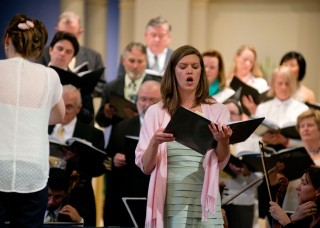 Gabriel’s Oboe from The Mission by Ennio Morricone, with Emily Snyder, Oboe

Bella Note from Lady and the Tramp by Sonny Burke, with the children

That’s Amore by Harry Warren, with Joe Ciani-Dausch and the children

Funiculi, Funicula by Luigi Denza, sung by Jason Lee and the choir